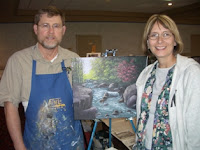 Last week I spent two wonderful days in an acrylic painting workshop with Jerry Yarnell. We worked on a more advanced piece called “Time of Rebirth” with lots of green trees and a small river with lots of little waterfalls. He also critiqued a lot of my work. Everything had the same basic problem – not enough value changes from the background to the foreground.

I had so engrained the lesson that when I attended the opening of a watercolor show at the Gallery at Metro I saw the same problem in almost everybody’s painting. The error glared at me from each one except my own. But that is just because it is a painting with no background of two civil war horses tied to a picket line (rope). I purposely chose not to include any background to focus all attention on the horses and their gear. This also allowed the detailing in the tack to show off to the best advantage. I had to find some pictures of similar tack used by other re-enactors to get the detail as close as possible to reality. There is no impressionism in this painting.

Going back to values in a painting, there should be at least three (minimum) from background, mid to front. For a more dramatic effect there should be at least five to six value changes from the back to the front. Getting more than six into a painting is very difficult but would be well worth the effort as long as you already have a good composition. That is what I will be working on achieving in my landscape paintings. If you are interested in learning to paint I highly recommend starting with Jerry. He has been painting and teaching in acrylic oil and watercolor for over 30 years. He is very accessible and accommodating to every age and painting style.
Posted by Unknown

Hi Karen,
Thanks for your post on Jerry Yarnell. Just to notify you that
http://www.yarnellschool.com/
is Jerry Yarnell's new and official website. If you can update the page, with the current site address it will be wonderful.
We are also connecting all the former students through our blogs and social media platforms.
Sincerely
Yarnell School of Fine Arts
https://www.facebook.com/yarnellschool 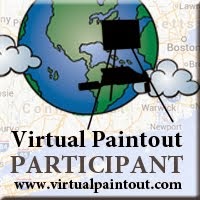